As an electronic product closely related to people's daily life, earphones provide great convenience. The traditional earphone industry has not revolutionized and changed for decades, and the development of it has been very mature already. In the past decade, the field of changes in the earphone industry has focused on Bluetooth earphone. Especially, TWS (True Wireless Stereo) earphones have been particularly eye-catching in recent years.

Starting with the true wireless earphone with sales of nearly $3 million on the crowdfunding platform of Indiegogo in 2017, TWS (True Wireless Stereo) earphone have become a common 3C product for consumers. Subsequently, the iPhone 8 canceled the 3.5mm earphone jack and released Apple AirPods, which greatly stimulated the entire industry. So many Chinese first-line hardware manufacturers, such as Huawei, OPPO and Xiaomi have released smartphones without 3.5mm earphone jacks. At the same time, the traditional big earphones brands as Sony, Bose, B&O and other newcome brand as Jabra and Jaybird have also joined the competition, enriching the industry of true wireless earphone and sharing a huge“cake”of market.

owning the brand of AWEI, Shenzhen Yale Electronics Co., Ltd has entered the TWS earphone market since 2016. In the past 2017, the TWS earphone industry has maintained a growth rate of more than 60%. According to data analysis from chip suppliers as Qualcomm and Realtek, the global shipment of TWS earphone will reach 65 million units in 2018, 100 million units in 2019, and 150 million units in 2020 - 60% of them are high-end headphones with High added-value of brand. At the same time, true wireless stereo earphones are also encroaching on the traditional wired earphone market, the whole industry still has hundreds of billions dollars of growth space with optimistic market prospects.

In 2018, there were two obvious changes in the field of TWS earphone. Firstly, some mobile phone brands with large market share, in particular Chinese mobile phone brands, which began to follow the iPhone strategy and released their own TWS earphones as their important interactive device: such as FreeBuds of Huawei and O-Free of OPPO. Secondly, after the fierce competition for smart speakers in 2017, some major Internet giants began to deploy AI Extended Scenes for TWS earphones: Baidu and Tencent's AI teams are actively seeking cooperation with earphone manufacturers. The AI giants of US - Amazon and Google are in the process of developing their own TWS earphones.

The Keyword density and relevance for earphone on the search engin and social media has continued unabated, such as TWS, True Wireless and True Wireless Stereo. From Broadway, Urban Sim, Fortress of Hong Kong to Costco of US: emerging brands such as Sudio, Earin and traditional big brands such as Sony, Bose and Jabra etc, they are occupying more and more shelves. The offline cargo volume on sales of AWEI is also growing steadily. 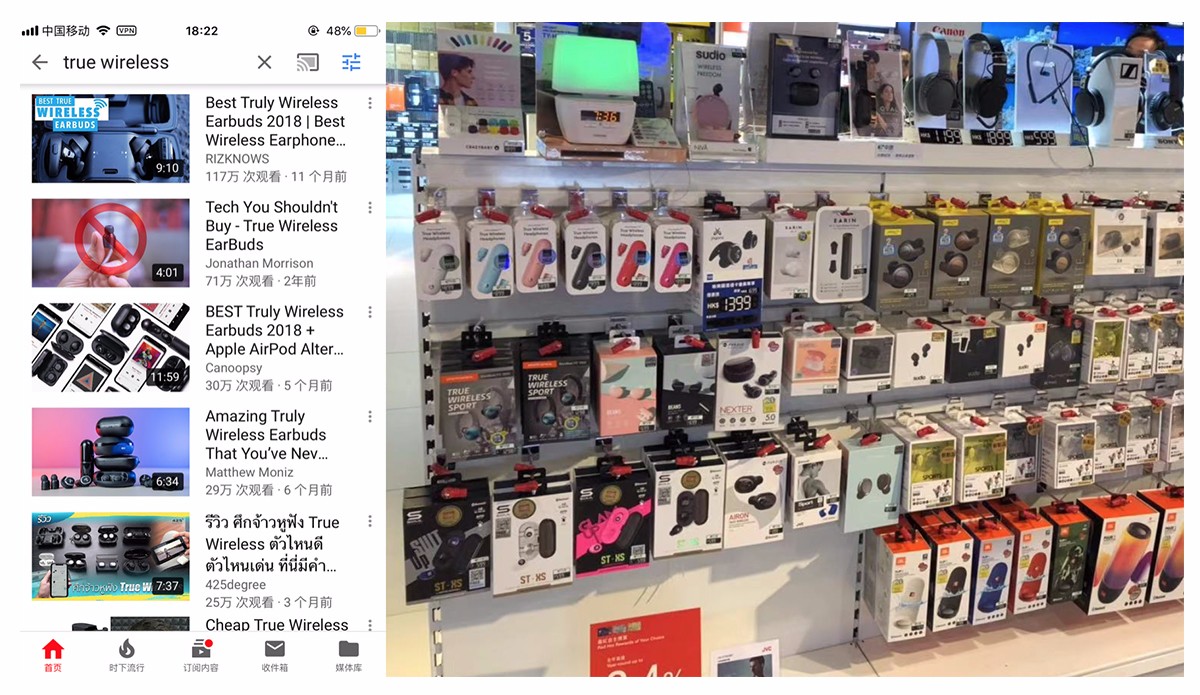 The Matthew effect is common in fierce market competiton and the alliance between gaints reinforce this trend: after near 10 years of development, Shenzhen Yale Electronics Co., Ltd has built stable and in-depth strategic partnerships with many well-known brands around the world, such as New Balance, Ferrari, GUESS, TISSOT, Skyworth, Aiwa and so on. With years of mature operation and strong strength, Shenzhen Yale Electronics Co., Ltd has become a world-renowned consumer electronics supplier with high reputation and praise in market all around the world. 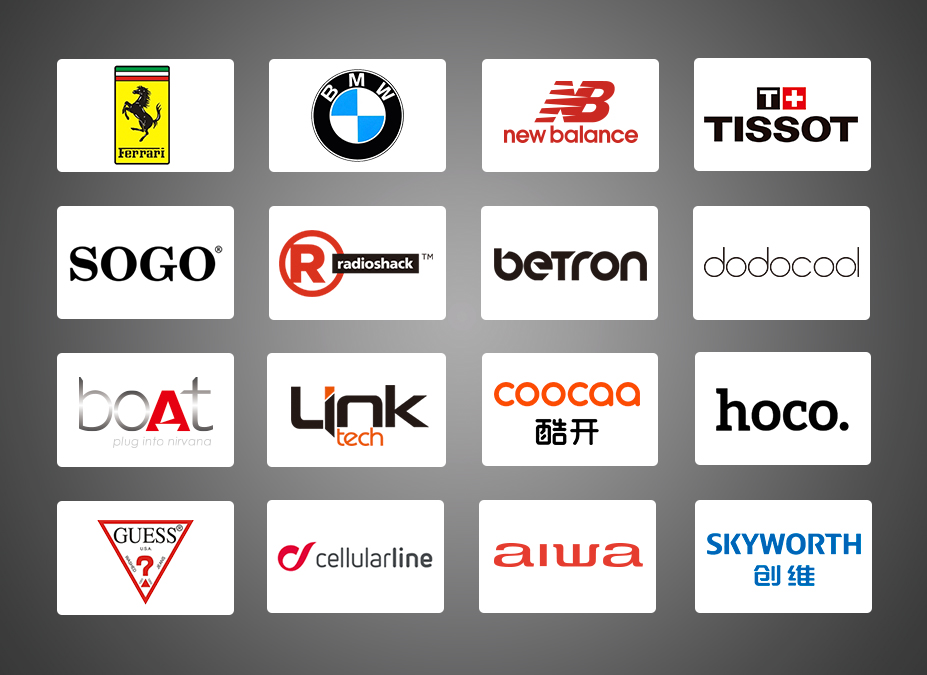 The TWS earphone market has tremendous commercial value and potential: through the update of technologies such as chips, the IoT dream may be the first to be realized in the audio field. The true wireless smart earphones that focus on the "mobile" scene will form an interactive closed loop with the smart speakers that focus on the "family" scene, and together with the AI technology and data of cloud of Google, Amazon, Tencent or Baidu etc, become the infrastructure in the AI era. Through the way of voice interation, earphones will be used as a connector in daily scenes, intergrating voice search, personal voice assistant, social communication, map, taxi, health data detection, sports guidance and other super applications etc.

In the fourth quarter of 2018, the TWS earphone market is in the early stage of explosive growth. AirPods of iPhone, Google Translate Headset and TWS earphones of Samsung and Huawei have been put on market in the past two years, cultivating users’awareness and usage habits that more and more people prefer TWS earphone. With the entry of traditional earphone brands such as Bose, Sony, Jabra etc and new brands such as Earin etc, the TWS earphones are developing rapidly toward diversification.

With the entry of some Internet giants and manufacturers of branded mobile phone, the competition in TWS earphone industry is becoming increasingly fierce. As the evolution trend of TWS and intelligent update in earphones, it is an inevitable trend that wired earphones will exit the historical stage. Meanwhile, TWS earphones will also encroach the market share of the wired Bluetooth earphone and original wired earphone as the rapid development of it.

It can be said that the current market dividend belongs to the big, established brand and the new brands with first-mover advantage. In 2019, the threshold for new competitors will be higher and higher. Taking AWEI as an example, compared with traditional established brand, such as B&O, JBL, Plantronics, the chip solution is complete, the RF antenna design is mature and reliable, with the addition of the supply chain advantage, the release of program and products can be in the lead than peers 1.5-2 quarters, and the products have entered the major retail e-commerce channels in the world.

At present, the average level of earphone in industry can basically reach the experience of AirPods, and even surpass it next year. Next, Whoever has the opportunity to eat the industry's dividends becomes giant in this market, whose products run faster, with better quality, better user experience. 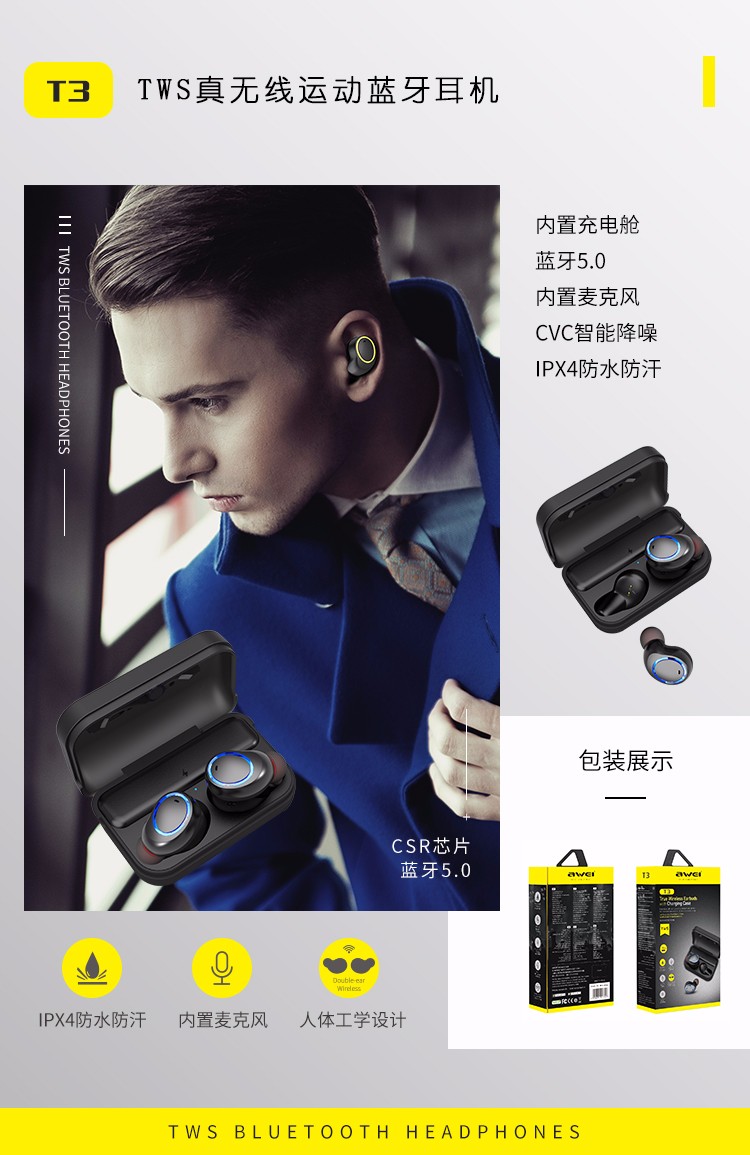 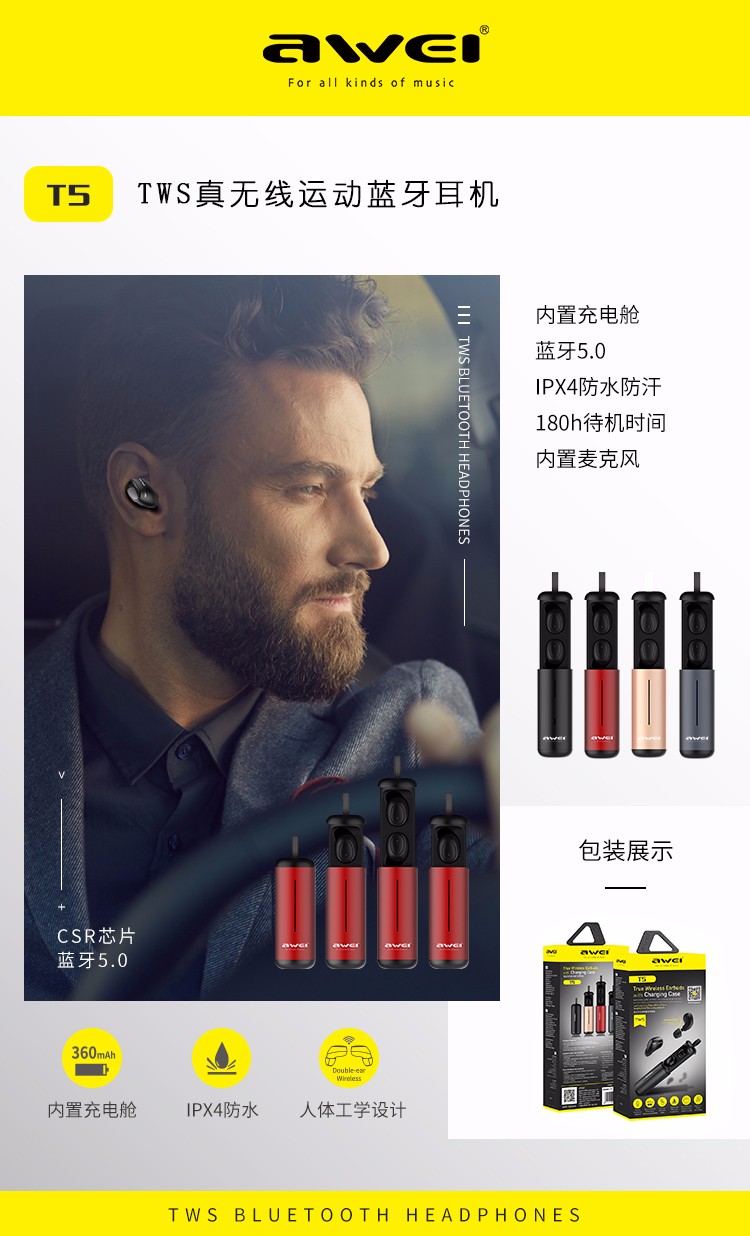 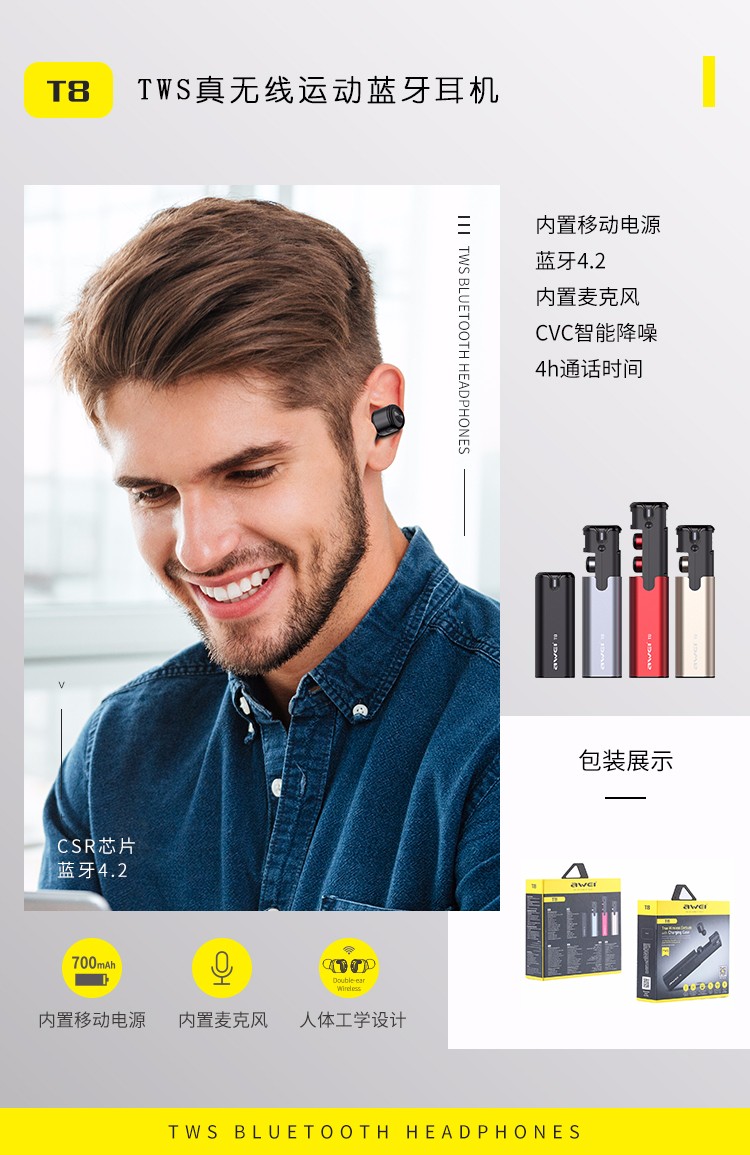 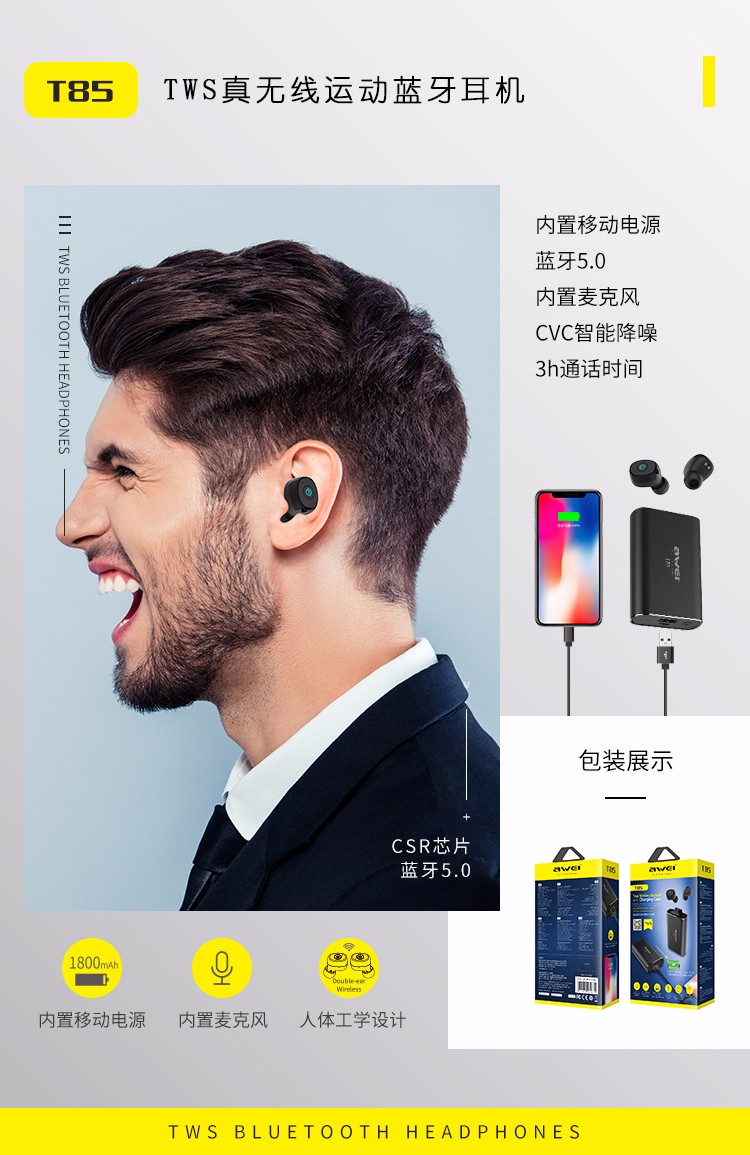 New Perspective of Earphone: There is still a Huge Market Space in TWS Earphone Industry As an electronic product closely related to people's daily life, earphones provide great convenience. The traditional earphone industry has not revolutionized and changed for decades, and the development of it has been very mature already. In the past decade, the field of changes in the earphone industry has focused on Bluetooth earphone. Especially, TWS (True Wireless Stereo) earphones have been particularly eye-catching in recent years. 2018/11/1 + Detail

T10C - TWS Bluetooth Earbuds of AWEI Hello, welcome to AWEI Boutique House. In the busy modern life, more and more people are learning to comprehend the true meaning of life, looking for a delicate balance between hard work and enjoyment. 2019/9/10 + Detail